24Genetics proposes DNA sequencing that is particularly strong on ethnic origins. So I had to test it. So, I transferred my data from 23andMe (they also accept FamilyTree DNA data) and paid the 49 euros requested by the site. A week later I received a detailed report, presented below.

To begin with, I wanted to know what offers this laboratory was proposing to genealogists. The answer is simple: none. There are no genetic cousin databases, so no possible matches. They only offer to analyse your genetic data, and either you buy the test from their shop (149 euros) or another laboratory transfers your data to them.

Since no other genetic genealogy laboratory accepts transfers of the 24Genetics' analysis, it is better to get tested elsewhere and pay 49 euros for the transfer.

24Genetics seems essentially to specialise in medical genetic testing, offering information about your nutrition, skin and sports. So without hesitating, I bought the complete health and ancestry pack for 99 euros.

They give an address in the United States (Massachusetts), and an address in Spain. The French site leaves something to be desired in terms of the quality of the translation. In my account space, Spanish suddenly appears instead of French.

But this is not inconvenient because no information is stored on the site. You'll receive a detailed PDF report of your results directly in your email inbox, and that's it.

My DNA provides good material for an ethnic origins test. Through my father, I am Serbian, therefore from Eastern Europe more generally, and through my mother Reunion Island Creole. Having studied their genealogy, I have French, German, Belgian, Italian, Portuguese, and Dutch origins on the European side, but also Indian, Malagasy and African origins.

I had my DNA tested by 23andMe, FamilyTree DNA, Ancestry.com, MyHeritage (transfer) and Gedmatch. So I have a lot to compare when it comes to other laboratories.

As Jacques Beaugrand pointed out on the Facebook page DNA Genealogy (French heritage), 24Genetics seems to analyse AIMS markers, regional markers geneticist Bertrand Jordan describes well in his book L'Humanité au pluriel (Humanity in the Plural), rather than customer databases. However, the information used by customer databases is not necessarily reliable, the laboratories simply asking you where your parents and grandparents were born. This explains the large disparities between different laboratories' responses.

The first disappointment is that the results provided by 24Genetics are reduced to the bare minimum and correspond exactly to the example provided on their site: just the detailed list of ethnic origins based on geographical regions of the world.

There's no description of which gene corresponds to which country, which would be very useful to me genealogically, or even any historical information about the populations found. The information is crude and very limited, reduced to basic essentials.

After this disappointment, however, came the delight. I must admit that these are indeed the most detailed and comprehensive results I have received on my ethnic background. Let's quickly go through them together. 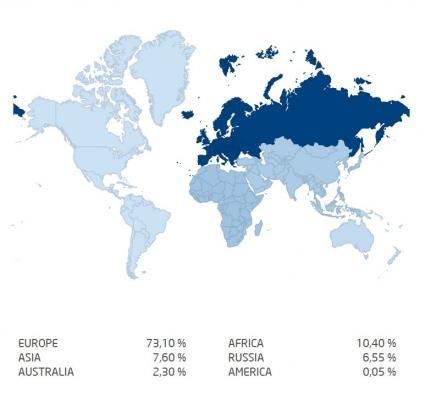 The PDF report, after an introductory page in English, presents a global view of the results by continent. This seems to be roughly consistent with the other results obtained, with 79.8% European origins on 23andMe for example. The difference with 24Genetics is in how they distinguished my Russian origins, which I had never previously seen in such detail in my results. I was also surprised by the precision of the result of 0.05% Native American origins. For Africa and Asia, the averages are roughly equivalent to other results. The information about Australia surprised me, although also consistent with the results I got on WeGene. Let's have a look in closer detail.

View by country of ethnic origin

This was a surprise. Generally, French ethnic origins are referenced by a general denomination "France and Germany," without distinction, or even by a "Western Europe" or "Eastern Europe" denomination, the regions of Western and Eastern Europe sometimes comprising the same countries! And sometimes they come under a general Southern Europe denomination. Note that on 23andMe, 2.4% of my DNA is unidentified. This is certainly my most "exotic" DNA for a predominantly American site with a reference panel of Europeans of origin.

23andMe's improvement of their reference panel for 150 countries has just made it possible to define a Serbian origin of 16%, but there are no other country precisions for any of the other regions. Which is very disappointing. 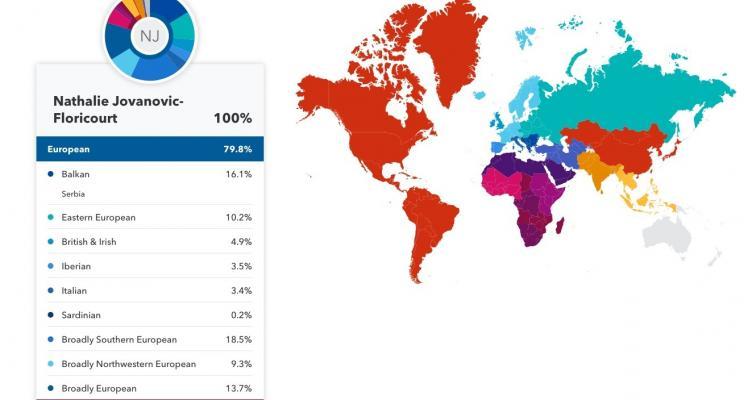 My ethnicity results on 23andMe

My ethnicity results on Ancestry

On Ancestry, the European origin results are hardly more satisfactory, but the details concerning African origins I'd never obtained before came as a nice surprise. Since they are committed to satisfying African-Americans in search of their origins, their panel is particularly detailed on Africa. But for European origins, the vast circles encompassing many countries proved to be very disappointing. 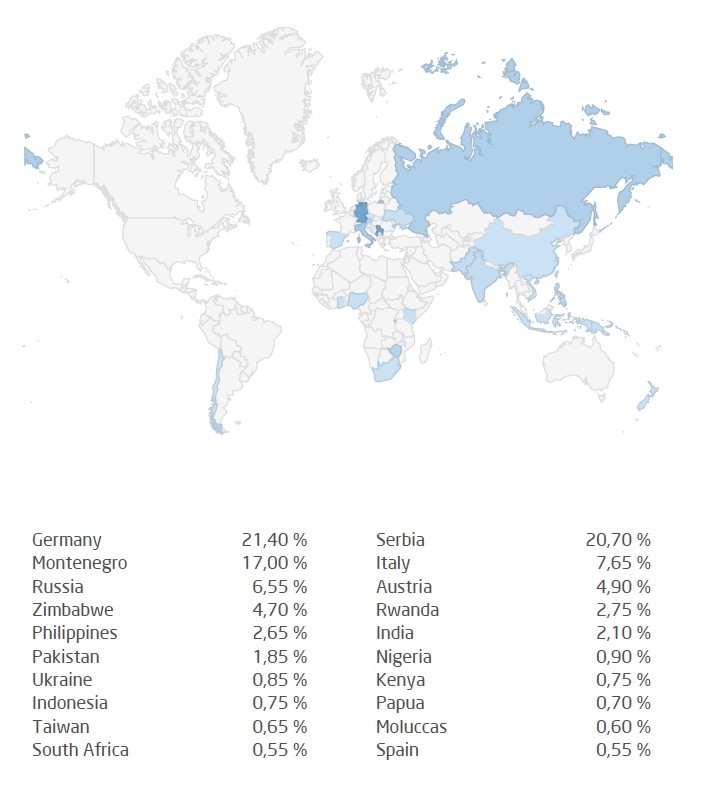 So I am very impressed with 24Genetics' results and at the same time surprised.

The detail regarding individual countries reaches a level I have never seen before. My father's Serbian origins are present. Montenegro appears, close to Serbia, whereas my father told me that we had Macedonian origins and the other sites indicated an "Italy-Greece" origin. Italy is present on the 24Genetics report but not Greece.

France doesn't feature, only Germany is represented at a high and also unexpected rate. That said, this can be explained by the fact that my French origins date from the 17th century, thus beyond the possible transmission of genes, limited to eight generations, so until the 18th century. So I would not have inherited French genes from my French ancestors (boo!). For information, 24Genetics promises to distinguish French origins for the following regions: Aquitaine, Auvergne, Brittany, Corsica, Grand Est, Languedoc, Normandy and Paris. You can find a list of 400 specific geographic origins at the bottom of this page on the 24Genetics website.

I found countries that I've seen here and there on other sites, such as Papua New Guinea (yes, believe it or not), South Africa, etc.

A surprise: Moluccas. Otherwise known as the Malaku Islands, an archipelago in Indonesia. However, this is due to my Malagasy origins. It turns out that genetic scientific researchers have established that the first Malagasy people originated from Indonesia, which moreover corresponds to my maternal haplogroup M7c3c1. Well, this absolutely blew me away.

Through my haplogroup M7c3c1, this not only confirms the details given by 24Genetics, but it gives me even more precise information about the possible origins of my Malagasy ancestors!

They present the origin details in the following way:

If the European country breakdown provides no further details, repeating the European countries listed above (on one page, in order to expand the number of pages), the information concerning regional data is also unprecedented in its detail.

I learned that my German origins are from the "Rheinland Pfalz" (the Rhineland). The information regarding the Russian republics, including Mordovia and the Mari El Republic, enabled me to situate my origins more clearly in the vast country that is Russia. I discovered regions that, although new to me, were consistent with my Indonesian origins: Ilocanos and Bihar. 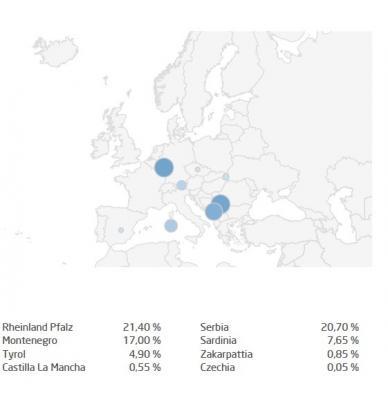 And there were more nice surprises. When you look at the regional data by continent, the results are even more refined. So, for Europe, my Spanish origins are more specifically 0.55% Castilian.

On the other hand, I am concious that all the other genetic genealogy laboratory websites indicated that I had between 4% and 5% "British / Irish" origins, and here there is no mention of any. On 23andMe, it was even specified that the ancestor of this origin was born between 1820 and 1880, which corresponds to a natural father missing in my genealogy. I will ask 24Genetics' customer service the reason for this absence. Especially as their reference panel enables you to differentiate British and Irish regions with precision.

For Russia, the regional breakdown indicates that I also have 0.85% Transcarpathian origins (Ukraine), and even 0.05% from South Dagestan. 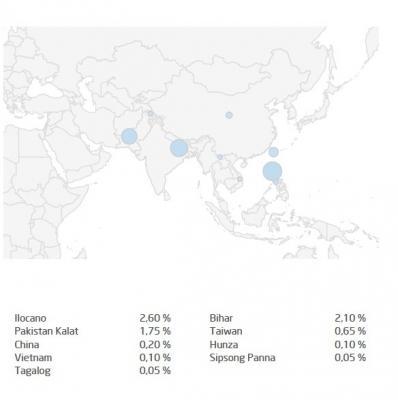 Ditto for Asia, where, at the time of writing, the level of detail is matched only by WeGene, specialists in Asian genetic data. But compared to all the European laboratories, this is unparalleled.

Pros: the precision and detail of the geographical regions of ethnic origin is unparalleled.

Cons: this is not necessarily genealogically exploitable because no genetic data is associated with the geographic regions. We do not have access to this level of detail which would be very useful, even indispensable, for genealogical purposes. The report is 13 pages long, including 10 actual pages of results. Sometimes you get the impression that they created pages just to have space to fill and that they could have compiled the information differently. There is no information other than that concerning ethnicity, the details of which are minimalistic at best, and a map with ethnic correlations.

Nevertheless, for 49 euros, I do not regret my purchase.

Having asked the managing director, there is no chance of them giving the position of ethnic origins on chromosome segments like other laboratories. They believe this would risk revealing their techniques, which they jealously want to guard secret.

With regards to the other question I asked them, about my British and Irish origins having disappeared, they told me that other laboratories tended to overestimate them, depending on their reference panels. This was later confirmed. On Ancestry, for example, the percentage decreased after they updated their ethnic reference panels in September 2018.

20 years in Publishing House, 13 years in the Bank where I still practice, and one passion: genetics. To share this universe, concerning us all, I wrote a book devoted to genetic genealogy: "DNA, a genealogical tool". and founded the DNA PASS association. The goal, that the general public appropriates the knowledge of DNA that everyone talks about without knowing much about it in the end.